Any one of us who has some annoyance about our own bodies, an annoyance that will only advance with time, understands the idea of "not being ready" to deal with the issue.  Your issue may be an advancing bothersome knee or hip.  It may be that pain in your side that won't totally go away - but you can live with it for now.

Eventually, when the pain associated with the situation gets severe enough, you will be at the point where you decide that you are ready to deal with it.  You go to your doctor and you begin the process of healing from it.  You go through the minor or major discomforts of the treatments and come out the other side of the experience saying "I wish I'd gotten that fixed a long time ago!"

To one degree or another, we all do that…

Each person's measurement of what "hurts enough" to take action on the situation varies.  Different people can tolerate higher levels of pain.  The "The Pain Scale Chart" serves patients and clinical service providers nicely because it takes into account an individual's ability to tolerate their personal pain.
Here's a look at that chart:

Substance Use Disorder patients who call that piece of sidewalk on Kensington Avenue 'home' are equally human with Non-Substance Use Disorder persons who live in big fancy homes.[1]   Their tendency to wait until their situation 'hurts enough' is no different than ours.  Except for those who have overdosed and died, when they are 'ready' they seek help.[2]

Almost every Substance Use Disorder patient on the streets of Kensington is reliant on Medicaid to cover their medical expenses.  There is the rare but occasional exception of the young person who is still on their parent's insurance or the military service veteran who does not realize they have veteran's benefits. 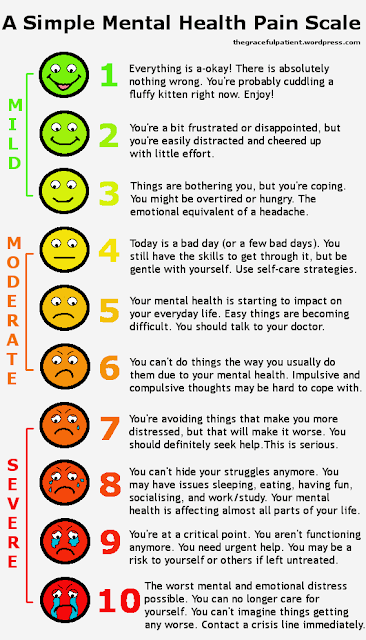 In this "Simple Mental Health Pain Scale" that can be found at this website, at level 10, the patient is urged to "contact a crisis line immediately."

Substance Use Disorder patients of the streets of Kensington are required to go to the local crisis center for services once they've decided they are 'ready.'

When the Medicaid reliant Substance Use Disorder patient reaches that point where they are 'ready' for treatment, the system, as it stands now, does not meet them in their present state of readiness - a mental place for this person that must be met immediately so as not to lose this life saving 'window of opportunity.'

Here's what I wrote last December as I compared the Medicaid system of health care for Substance Use Disorder patients with the private insurance side of the issue.  "George and John" are fictitious brothers.  Their experiences are all experiences that I have had with real people during the past 2.5 years.

On the Day that George and John were born, their parents, in a fog of addiction, gave them up at local safe drop off stations, George on one day at one such station and John on another day at another station.  As fraternal twins, they looked nothing alike.  They bore no identical traits other than the propensity for addiction that lingered quietly within them.

George and John were placed in loving homes through adoption.

George's home was one of considerable financial wellbeing, mostly through his parent's many real estate holdings.  George went to the finest schools as a child.  In 2008, finances dried up for George's family and times got tough.  His Dad and Mom moved their family of three into the basement of a family friend who had a dark side.  This friend introduced George to aspects of life that no child should ever know.  The resulting pain and confusion within the soul of George awakened the inner demon of addiction.  Heroin became his only and best friend.

John was adopted into a hard-working family.  Mom and Dad were both tradespeople.  Dad was a plumber and Mom an electrician.  Mom and Dad loved athletics and as John grew, they encouraged him to find a sport that he enjoyed.  John was awesome at high school baseball.  On one fateful day, he slid into third base and shattered his leg.  Surgeries lasted for months.  During this time, to manage his pain, John was put on opioid-based pain relievers which handled his pain and awakened his inner demon of addiction.  In time, heroin became his only and best friend

Twins separated at or near birth and who know nothing of each other have been shown to often do the same things throughout their separated lives.  George and John are examples of this phenomenon.

On the same exact day toward the end of 2018, George and John made the same decision...

George woke up in his tent in a "homeless people's encampment."  He glanced over at his tent mate, a young lady in her twenties.  She lay there blue and lifeless with a noticeable facial injury, the result of a date gone bad just hours before.  This, combined with other recent street deaths of friends by overdose, pneumonia and one out of control car and his own multiple overdoses saved by Narcan in recent months watered a seed of rational thinking that had laid dormant for years within George.

John lived with his addiction and his family and kept distant from them but not from it in his basement apartment.  He began to realize that life was not going in the direction it needed to go.  One night, upstairs, around his parent's kitchen table, John confessed his sadness and self-loathing to his Mom and Dad.  The three of them through a lot of tears and a tiny bit of yelling decided on a course of action to address John's addiction.  With private insurance cards in hand, phone calls and arrangements were made for John to enter detox and rehab.  Later that same day, John injected one last dose of his needed medicine, was picked up by a driver from his rehab home of the next 28 to 30 days, arrived and was met by men and women who treated him with the dignity and respect deserving of any human being.

From the moment John entered the building and on his walk to the admissions office and then to his detox room, John walked through tastefully decorated halls lined with portraits of famous strugglers of addiction and inspiring quotes from people throughout the decades.  He could not help but notice the brightly lit lounge areas with their electronic fireplaces and large screen TVs.  Under his shoed feet, every step of the way, he walked on well maintained simulated hardwood floors.

George knew what he needed to do to enter detox.  For the next few days, as he continued his normal routine of living in a tent and 'flying a sign' at street corners that read "Hungry," George connived to survive and hustled to pull together an extra $60.00 so as to buy extra dope to hide on him during his expected one day wait in the Crisis Center several blocks away.

With enough money in hand, he bought the extra dope, and then walked to the Crisis Center, pushed the button on the brick wall next to the secured ill painted metal door with the wire laced security window located in the middle of its upper half.  After a couple pushes of the button, a security guard opened the door and asked why he was there.  After explanations, the guard told George to come in and strip down in public to one layer of outer clothing, to empty all of his pockets, remove his shoes, allow himself to be frisked and to walk through a metal detector.  With growing fear and trepidation and a fading determination in his heart, George complied.  With socked feet, he walked across the worn and tattered simulated hardwood floors that ran throughout the facility to the awaiting receptionist; was handed a clipboard with papers to be filled out and told to "Sit over there and fill these out."  Once filled out, he handed the papers back along with his Medicaid insurance card.

As George sat down, he glanced around the room of grey chairs each attached to the one next to it.  Three other people were in some stage of being processed.  All were asleep.  One was a woman whose 'one layer of outer clothing' had obviously been her only clothing for quite some time.  A man, asleep and draped across two chairs and covered with a blanket, lay motionless representing the hours of waiting he had endured thus far.  The other waiting room resident and only Caucasian of the three looked suspiciously familiar to George.  As George looked at him, asleep in his chair, he wondered if this was the same man he's seen in a recent "Has anyone seen my son?" flyer posted up and down the avenue.

One urine sample, one medical exam, one interview and six hours of room observation later, George was starting to experience dope sickness and needed to use the bathroom.  From observing, he knew that anyone who asked to be allowed into the locked bathroom would be checked on after a very short period of time.  George knew that he could not, during that short interval of privacy, prepare and inject the dope that he had smuggled in and stored on him where nothing to be consumed should ever be stored.

With an onset of diarrhea from dope sickness nearly guaranteed any minute, George requested to use the only bathroom.  He entered it and saw one toilet and two urinals against one wall none of which had any hint of current privacy provided except for the small holes in the wall that suggested that privacy enclosures once existed.  All pipes typical of bathroom fixtures were boxed in so as not to be used in combination with one's belt for the purposes of hanging and ending the misery.  But what did that matter?  By requirement, George had surrendered his belt hours ago.

It was more than George could take.  He walked out of the bathroom without feeling better, politely told the nurse that he was leaving, was reintroduced to his belongings, left and found a back alley nearby to use as his bathroom. 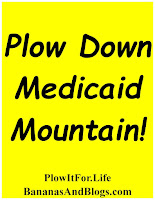 George is living in a tent.

The one thing both facilities have in common:  Simulated Hardwood Floors.

For further reading on this, I invite you to this blog.

[1] And don't think for a moment that there are no formerly fancy -homed people now on that sidewalk!
[2] While it goes beyond the point of this blog entry, it should be pointed out briefly that the ability of the Substance Use Disorder patient to rationally determine their 'readiness' is hampered by many factors of overwhelming non-rational thought processes.