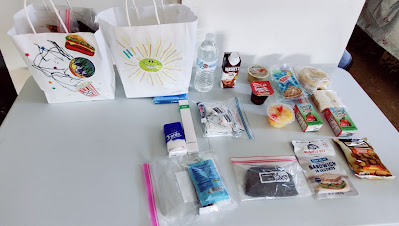 For the past three months or so, my lifelong friends, Shannon and Anne have been organizing some
amazing care packages for me to distribute to the people on the streets of Kensington.  Once every two to four weeks, I've been given anywhere from 10 to 20 bags.  Each is hand decorated and stuffed to the gills with items that are relevant to the needs of the people and season of the year.

As you may know, the needs on the streets of Kensington are staggering.  Since the beginning of this incredible effort, now known as Steven's Bags, rather than hand these bags out to the first x number of people I see, I've discreetly distributed them to specific people on the streets.  I may or may not already know each person.

In each of these examples, it's an incredible privilege to look at each person and tell them that they are unconditionally loved.  And that's the point of these bags.  By discreetly handing out one bag at a time, I'm given the privilege of connecting with an inspirational human being who is made in the image of God and who is worthy of dignity, honor, respect, and love.

A note from Shannon:

Steven’s Bags is a grassroots effort to provide a little love in the form of hand-decorated bags packed with food and comfort items for you.  Steven is autistic, does not communicate with speech and uses a wheelchair for mobility. Although originally Steven was only decorating the bags, he now shops for content and participates in the packing. Steven is blessed with a loving and supportive family who focus on his strengths and abilities and a team of support staff whose patience and creativity help him share our love with you.   Look for Steven's Bags on Facebook.