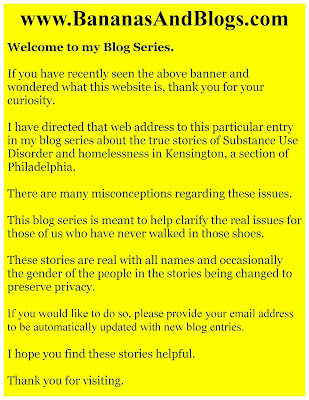 Click here to be directed to my most recent blog.


I Need My Medicine.

"How are you?" is a typical and a rather sterile question that everyone asks everyone else when we first see each other each day.  It's come to mean not much of anything.  Do we really care how the other person is?

I'm guilty of it just as much as anyone else.  When I was first getting to know the men and women of the community under a bridge in Kensington, I would say "Hi, (first name), how are you today?"   The most typical answer that I receive has been along the lines of "Not well.  I'm sick.  I need my medicine."  And here's where my lack of understanding due to never being an addicted person myself shined bright like a spotlight on a foggy night...

I would look at each person and ask them what type of cold they had, chest, head, allergies?  Out of the politeness that I've discovered in almost every person in this community, they would respond with,  "No. I'm dope sick and need my medicine."  I still didn't really understand what they meant until just a couple days ago when a member of this community explained through word and example exactly what was meant by this phrase.

I sat down on the sidewalk with one person who was feeling dope sick.  He told me that it had been far too long since his last heroin injection.  Dope sickness can manifest itself differently in different people.  His dope sickness was something like allergy becoming flu.  In the few minutes we sat together, I observed his symptoms going from mild to severe allergy to a headache and nausea.  He apologized in advance for the possible accident he may have in his pants.  "I'll be better as soon as I get my medicine."

He excused himself from our conversation to get his medicine.  I saw him again not even half an hour later and he was completely healed.  All symptoms were gone!

"All I needed was my medicine."

I finally got it... At least to a small degree, I finally understand the desperate need of a person trapped in addiction to continue to "need their medicine" to keep from becoming increasingly outrageously physically sick.

What's missing from the above description?

Nowhere did I mention getting high from their drug use.  I sat down with another person on the opposite sidewalk from the above discussion as he prepared four or five packets of heroin for one injection.  As he was doing so with the skill of any R.N. preparing a shot for a patient in a hospital, this man looked at me and said, "Chris, I've built ups such an immunity that I don't get high any more.  I continue to do this to keep from getting sick."

"I need my medicine."

For some but not all of the lady members of this community, their source of income for their medicine is their body.  One woman told me that to keep from getting sick, she will stand on a street corner or walk around on Kensington Avenue for hours as dope sickness settles in until some 'man' makes an offer.

"One was an important lawyer who picked me up in his Cadillac, took me to a center city hotel, tied me to the bed, had his way with me, got dressed, untied me and left the room.  I had to use some of the money he gave me for public transit just to get back here to buy my medicine."