Lady In A Box - Part Two

On March 21, 2018, I wrote this blog of several short stories.  One of those stories was titled, "Lady in a Box"  This story happened as a major winter storm was almost at our doorstep.  Here it is copied into this blog for you…

With this nor'easter bearing down on us bringing 8 to 12 inches of snow in the next couple of days, I wanted to try to visit as many people who I know as I could.  With a bitterly cold light wind blowing through the Frankford Avenue underpass, I was distributing water and no bananas.  At one point, I was talking to a group of five men and women.  I glanced over to a large cardboard box with something of a window in it.  Two eyes looking alive but lifeless were looking out.  I went over to see if they were ok and if they wanted water.  They hardly reacted.  I said it again and the person seemed to become aware of my presence right outside the window.  She said that she was very cold and did not have a blanket or good enough coat for the upcoming storm.  Fortunately, I had a coat with me but not a really good one for the temperatures.

As I was walking back to this woman's box home that already had a dusty layer of snow on the cardboard roof, I saw a brand new quilt still in its store plastic zipper bag.  I was about to grab it when I decided that might not be such a good idea.  One person suggested that the "owner" of that spot on the sidewalk might get angry.

I sought a second opinion from Casey who happened to be there having walked from the other community where the [other] stories [in this blog entry] transpired.  She agreed that I should not take it from that pile.  "But I can." She said of herself.  She got it from the abandoned pile of other items and handed it to me.  I slipped this quilt through the window to the lady in the box.  Her eyes sparkled for just a brief moment as she saw what was coming her way.  She thanked me and then asked, "Do you have any bananas?"

My reputation as "Banana Man" follows me everywhere I go in these bridge communities.

The lady in the box survived that storm, the remainder of winter, spring, summer and most of the fall until one day in the middle of October 2018, that changed her life forever.

Jolene, for a long time, has dealt with addiction and homelessness.  If that's not enough to have on anyone's plate of burdens, she also has a large portion of Multiple Sclerosis (MS).[1]  While it did not happen a lot, Jolene could occasionally be seen rolling around in a wheelchair in Emerald City and the Frankford Avenue Bridge Communities and in busy intersections holding a cardboard sign, in search of funds from drivers to support her medicinal needs and life on the streets.

All that changed in an instant on that October day when Jolene was standing in traffic at the corner of Kensington and Lehigh Avenues when a car hit her.[2]  The resulting injuries put her in the hospital and in a coma for the next two months.  Her body detoxed while she lay there unconscious and with loved ones wondering if she would survive.

Jolene came out of her coma and began a healing process that has involved multiple forms of therapy.

With the help of Prevention Point and  Pathways to Housing, Jolene recently moved into her own apartment, continues her therapies and has an amazing outlook on her newly reclaimed life.  I recently had the privilege of sitting down with Jolene in her living room where we drank coffee that she prepared in her kitchen as she shared with me the events of these past few months and her goals for her bright and beautiful future.

In Jolene's own words, "Who would have ever thought that getting hit by a car and being in a coma would have been the best thing to ever happen to me!?" 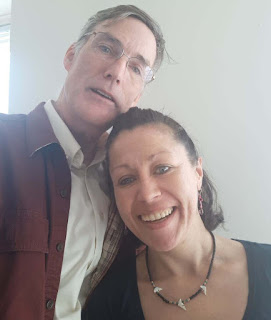 Jolene has her own blog series that you can read by clicking here.


[1] a serious progressive disease of the central nervous system, occurring mainly in young adults and thought to be caused by a malfunction of the immune system. It leads to the loss of myelin in the brain or spinal cord and causes muscle weakness, poor eyesight, slow speech, and some inability to move.
[2] Having no recall of the event, Jolene thinks this is where it happened.
at 1/22/2019 11:07:00 AM