"Emerald City" as we know it, will be no more effective 10:00am on January 31, 2019.[1]  Some of its residents will go into shelters provided by Prevention Point and other organizations.  Thanks to Pathways to Housing, some will actually get their own apartment. The residents whose "Entity Named Addict" chooses to remain on the streets will go to similar tent communities.  New tent communities will be and already are starting to pop up elsewhere.  Some of these men and women will take up residence on an open piece of sidewalk without a tent.

Some of these fine people, and here's a big concern, will find an 'abando', that is, an abandoned building, move into it by themselves, continue to take their medicine, overdose and die.  No one will be around to see that this son or daughter, [2], is in danger.  This human being who has been made in the image of God will be gone forever.

Emerald City and its previously populated three other local Conrail overpasses are the creation of a similar eviction from "The Tracks" a couple of years ago.  See this Channel 6, Action News report.  Be sure to watch all of the videos.[3]

Emerald City is a 'grassroots safe injection site.'  It will no longer be a place where one addicted person administers Narcan to another community member when overdose seeks to claim their life.  Unnoticed death by overdose is incredibly rare in this community.  Of the five overdoses that needed Narcan that I've witnessed in Emerald City, all were saved by a resident who provided it (as well as CPR in two of those situations.)

Residents of the area will be pleased that they can safely walk down both sides of the sidewalk.  Incoming developers will be pleased that they can start building their expensive and expansive apartment complexes.  Daughters and sons will scatter to new areas and some will die.  Parents and loved ones will be broken hearted and live the remainder of their days like this: 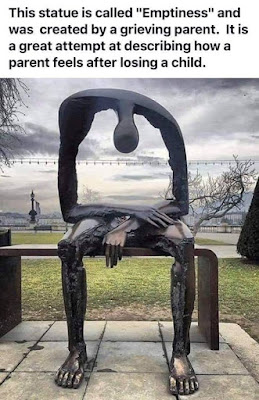 Moving these people without having a clear plan for all of them, a plan that includes dignity and respect for who they are as humans, is risky and does not solve the main issue of providing medical care to individuals who have a disorder recognized by the DSM-5.

I'm happy that many of the people who I've come to know and love have already moved on to actual housing or detox and rehab.  Many more remain.

Hold those thoughts for a moment…

Looking across the street, I saw a young lady standing next to her tent at this location under the bridge.  She came over to my car and looked through a few winter coats and other clothes that I had, thanks to Beth, a friend in the Delaware County suburbs.

As Jen was sorting through these items, she was sharing her thoughts about addiction, life in Emerald City and this forthcoming eviction.  This obviously intelligent and well-spoken woman put into words so clearly the situation at hand for the hundred or so people who are currently calling this railroad overpass 'home.'

The more I listened to her convey her very clear message, the more I quietly wondered if she would be willing to publicly share it with you, my blog reader.  I asked her if I could interview her without showing her face and with using a blog name of her choosing.  "The camera could be looking at me as I ask you questions and as you share your thoughts off camera."  Her response surprised me when she said that she would like to be interviewed on camera and using her real name.

Jen excused herself and went to her tent to get dressed up for the occasion.  We walked outside of Emerald City itself to this location on Lehigh Ave.  Our thought was to do one practice interview and then do the real one for sharing.  The practice interview was so honest and natural that it became what we, Jen and I, now present to you.

Jen could easily be your daughter, sister, cousin or aunt.  She's one among a few thousand people within Philadelphia who are addicted and homeless.  Let's do all that we can to address the real issues and stop evicting these good people from their grassroots safe injection (and living) sites.

Note: I checked in with Jen two days after this interview to be sure she still wanted to be publicly recognized.  I was told that she did.  Thank you, Jen, for sharing your thoughts!  I never post pictures of anyone without their permission which is why there are almost no pictures in my blogs.

[1] The City of Philadelphia has chosen to evict this community of people.  Attempts are being made to find housing for everyone.
[2] this resident of Philadelphia or any of its surrounding counties
[3] Every person who is interviewed is a person I've come to know and still see on a regular basis.
at 1/04/2019 08:36:00 AM