Throughout this blog series, I have not used actual names of people whose stories I've told.  Some names have been given to me to use as a blog name by the actual person I'm writing about.  Occasionally, I've changed the gender of the person in the story so as to add anonymity.  When I see an opportunity to do so and to further add anonymity, I will blend similar stories that bear a common theme.

Like nearly every rule and procedure in life, there is the occasional needed exception.  Today, I want to tell you the true story of an entity actually named "Addict."

Keep in mind, of course, that this is more parable or analogy that actual scientific or medical fact.

The entity named Addict lives in an incredible number of people.  Addict's life goal is to destroy its host, the person within whom it resides.

Addict itself is genderless and takes on the gender of its host.

Addict easily takes on the traits, skills, abilities and educational level of its host.  Addict can reside in a human who performed the most delicate of surgeries or reshaped a city skyline through architectural design or pastured a church just as easily as the human who never saw the inside of a school.
I've met Addict residing in an architect, a pastor, a poet, a musician, a social worker, a professional counselor, men and women of various trades, a lawyer, a business owner, an almost neurosurgeon, a nurse and so many more.  I've met Addict residing in men and women whose celebrity relatives are people who I know you would know.

Addict sets up its residence in each of these people and determines to destroy them from the inside.

One of Addict's first goals upon moving in is to isolate its host from their family and close friends.  It does so by taking this otherwise rational, intelligent, kind and thoughtful friend and family member and turning them into someone no one who loves them would have ever anticipated, including its unwitting host themselves.  Through words and deeds, the bridges that connect this unwitting host of Addict to friends and family members are eroded and often collapse.  Addict celebrates these moments of connection destruction because, now, it will be much easier to further destroy its host.

With bridges broken, Addict's next goal is to further destroy any remaining thoughts of self-worth that its host may hold.  Joblessness and Homelessness are often a result.  Steal and be stolen from becomes the new norm.  Theft by deception becomes commonplace.  Otherwise reasonable people connive to survive.
In time, and not much time at all, the man, a self-respecting architect, becomes in his mind, a "worthless hobo."  The deeply committed Christian lady becomes, in her mind, "a hooker who can only attract men who like to hurt ugly white girls like me."

If there's anything I've come to understand about Addict and its life mission of destroying its host, it is this:  Addict can be evicted from its host!  Hosts of Addict scream for help all the time in obvious ways that can be summed up with this now removed S.O.S. sign that was painted on the Frankford Avenue Conrail overpass wall above the tent homes of men and women who lived there until last week when they were evicted by the City… 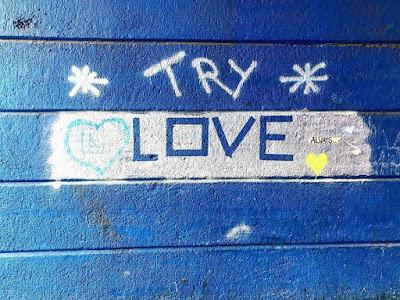 It is beyond the role of this blog to tell you, as family, friend, church or religious community, or City of Brotherly Love how to love the person and people hosting Addict.  Your answer can be found by you in these words from First Corinthians:

4 Love is patient, love is kind. It does not envy, it does not boast, it is not proud. 5 It does not dishonor others, it is not self-seeking, it is not easily angered, it keeps no record of wrongs. 6 Love does not delight in evil but rejoices with the truth. 7 It always protects, always trusts, always hopes, always perseveres. 8 Love never fails.

Find a way to fulfill this scripture and this sign which, as of yesterday, could still be found on the opposite side of the bridge from the above S.O.S. sign... 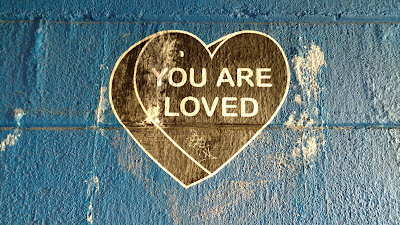