The Stars Burned Bright at the Party in the Park

As the clouds of a rare late fall nor-easter drift overhead dumping rain on Route One right outside my third-floor apartment living room window, I'm catching myself feeling very down about a couple of Kensington-based relationships that I hold dear and don't seem to be going well.  I'd appreciate your prayers.

In the midst of that very real sadness, I'm filled with joy as I reflect on this past Saturday and the people who came to the party in the park.

On Saturday, three women from Steven's Bags, an incredible organization in the Philadelphia westerly suburbs, merged efforts with three previously unknown-to-them men from Angels in Motion an incredible organization located in the Philadelphia northerly suburbs.  They were joined by one of my most excellent coworkers from RCA and her favorite man.  These eight suburbanites merged efforts with three members of Urban Hope Church an incredible community of Christians located in North Kensington.

The star of all of this merging was Steven himself and his caregivers as he distributed 20 of his bags to the people of the streets of Kensington.

The actual 'stars' were not the hosts of the party.  The actual factual stars were the invited guests who in the days leading up to this party seemed shocked that they, they who carry labels such as

would actually be invited to a party.

It was a joy to share this party and consume cupcakes with Bob, Allison, and Pastor Martin among so many others who have not yet been emblogged.[1]

At one point, Rob, Urban Hope's most excellent Bible Study leader, stepped back from the crowd to estimate how many people were gathered around the various tables that were set up for cupcakes and clothing circulation for this party in the park.  He estimated 70 at that particular moment.

There were many other people who participated in this party's preparation.  As described on the Steven's Bags Facebook page:

Huge shout out to Wegmans in Downingtown for donating 150 cupcakes for a Girl Scout service project and....  Another HUGE shout out to the Cadettes, (6th to 8th grade) from GS troops 4029 and 4393 for decorating those cupcakes for our outreach yesterday. They were so popular and brought smiles to so many faces, it was such a joy to be able to offer them.

Another very much appreciated cupcake contributor is Ryan Holder, an amazing man and a Philadelphia-based gourmet cupcake baker.

The following day, Sunday, I was visiting the people on the streets a few blocks south of McPherson Square.[2]  Many of these people could not get to the party for their own understandable reasons.  The level of regret from these people who our LORD labels as

made in the image of God worthy of

was obvious and apparent.

[1] Dakota so much wanted to be there but the responsibilities of maintaining her addiction in the absence of prompt and dignified health care didn't allow her to be there.  You were missed and yet I understand.

[2] the location of this party in the park

Dear Friends, You're Invited to a PARTY!!!!!

This coming Saturday, October 23, 2021, Steven of Steven's Bags, Urban Hope Church, and I along with other groups are hosting a birthday party at McPherson Square.

I'm using my birthday as an excuse to do this but I'm NOT wanting this event to be ABOUT ME.

This is a party for the amazing misplaced people of Kensington who are dealing with Substance Use Disorder and who never get invited to anything referred to as a 'party.'

These amazing people are never invited to a 'party.'

This is intended to be a party - a bit low-key due to a low budget - but a party nonetheless.  We will have some clothes, food, medical supplies, and maybe a medical person on hand to tend to street-related wounds.

We will be emphasizing conversation, connection, and cupcakes.  Oh yes… water and bananas and song sheets - my trademarks.

One treasured friend who is still living with their Substance Use Disorder has said that they will be forfeiting some of their drug money to buy and bring helium balloons!  Want to see me cry?  That moment will do it - guaranteed!

I invite you to bring birthday-themed food items to share.  If you represent a particular group that provides services, please join us under your group name and maybe bring some cupcakes, other party foods, or party games.

If you'd like to help financially support this event, attached is a list of ways to do so.

Above all else, please pray for this event and these future party-going 'guests.'

In my heart, they are not actually 'guests', nor 'lost souls' nor any other term often inappropriately applied.   After five+ years of coming to Kensington about three days each week, these patients with Substance Use Disorder have become a central part of my life AND treasured friends.  "They" are no longer 'they' but rather a natural part of me as any genuine friend would be.

Please do consider joining us with your presence, prayers, and/or wallet to make this party a party for people who would never ever be invited to one as they live with and do what they do due to their Substance Use Disorder. 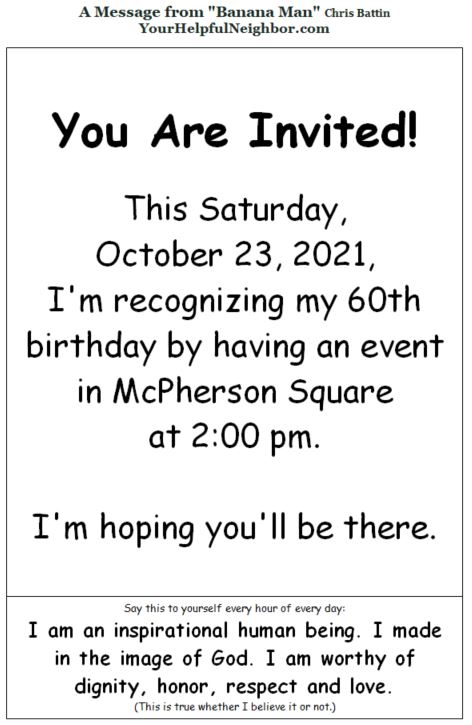 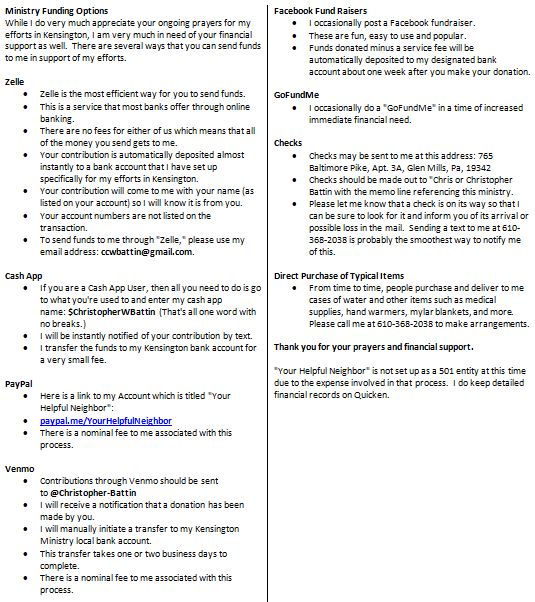 My Church, Urban Hope, is between pastors these days…  Well, as far as officially appointed positions go, that's true but not real in reality.

Rob has been leading weekly Bible Studies since the beginning of Covid-19, first completely online and then in person in the social hall of our church once we could start gathering again.

Rob's knowledge of our Christian Faith is an amazing and rare combination of heartfelt Faith and intellectual well-read knowledge.  And why wouldn't it be?  He met Jesus first hand as he read a Bible undisturbed while living in a hole in upstate Pennsylvania.  There are a couple 'code words' in that last sentence that some readers here will clearly understand.

Rob's approach to our Faith and found very clearly in his approach to Biblical interpretation and teaching is that we are saved by God's Grace.  If we, individually have accepted Christ, even if our behaviors have not yet caught up to the status of wholesome living, we're covered by God's Grace.

This past Sunday, Rob (Real Name) and Sam (Blog Name), and I were standing in the gym of our church where we had just watched the movie "I Still Believe."

Sam was telling us of his Faith and how he wants to find total release from his opioid usage but isn't there yet.  Sam had found that moment and maintained it for a considerable time some time ago.  The call of the wild shouted loudly one day and Sam was back at it.  Sam wanted healing.

Rob assured Sam that even with his current drug usage, his eternal salvation was absolutely unequivocally guaranteed by God's Grace and Sam's commitment to Christ.

48 hours later,[1] Sam's eternal healing unexpectedly arrived through God's Grace, his commitment to Christ, and a blue packet of five-dollar 'dope' that did him in.  Overdose overtook his body while God's Grace overtook his soul.

Sam's final conversation in a church from a pastoral person was that he is saved in the here and now and for all of eternity by God's Grace and his personal commitment to Christ.

Little did the three of us standing there realize that two days later, Sam would enter the Presence of the Trinity for the remainder of time itself…