Girl Scouts, A Coat and An Angel's Name in Kensington

Of all the flavors of Girl Scout cookies, my favorite is the Thin Mint.  One box equals a gluttonous dinner, permitted once a year…

So what does this have to do with my most recent activity with Urban Hope?  I'll get to that...

Each and every year, the Girl Scouts sell cookies.  We all know that and most people look forward to buying a box or ten.  These days, it’s more common to see a troop of girls behind a table at the local grocery store or bank selling their cookies to the folks who walk past.

“Yea… Yea… Yea…  Get to the point Chris.” Your saying to yourself.  “Your stories are way too long.”

Six hours before the end of the calendar year that had mountain top experiences mixed in with deep sea valleys in my personal life, I was with Urban Hope for my first Homeless Ministry night.  Having gone to Urban Hope for about three months, I am comfortable with the two block area around it.  This idea of going somewhere else within Kensington was another issue.  I arrived at Urban Hope thinking that we were distributing winter clothes, which we did. 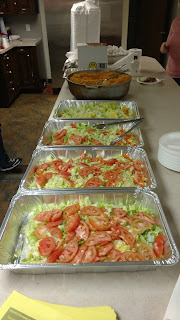 What I didn’t know is that we were distributing dinner as well.  We packed up about 100 homemade barbecued chicken dinners with “Puerto-Rican Rice” and a salad that would please the hardiest salad fan.  Families from Urban Hope, families with young children, were helping with this packing process.

As that phase was concluding, I turned to a man named Orlando and asked him if the children were coming with us.  “Oh, yes.”  He replied.  The suburbanite in me became a bit nervous.  “Should these (just say it Chris – white – ) children be going into the ‘badlands’ to serve meals to the homeless?”  My upbringing continues to plague me in moments like this.

I had and still have a lot to learn about Urban Hope and its ministry!

We loaded one of Urban Hope’s vans with supplies, two men named Orlando, another man whose name I can’t remember right now and me.  I wasn’t even sure exactly where we were going as this video clip will testify.  (It was so dark that you won't see much but the discussion is fun.)

We arrived at the symbolic center of what some refer to as the Badlands: the intersection of Allegheny and Kensington Avenues.  We set up tables and placed the clothes, care packages and hot meals against the wall of a deserted bank building.  People, almost exclusively men, seemed to come out of nowhere.

The goal of this every-other-monthly (What’s the proper term for that?) ministry is to feed both physically and spiritually.  As much as possible, we prayed with each homeless man and woman.  The men on the team prayed with the homeless men and the women on the team prayed with the homeless women – of which there were far less.  The first man I prayed with asked for prayer to be a better man, that his family would forgive him and that he could stop using heroin.  He then took my hand and I became aware of his half fingers pressing into the palm of my hand.  We prayed.  He thanked me.  He was given his meal and other items. 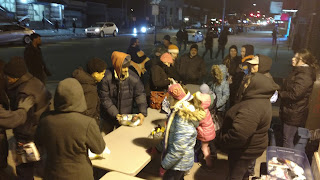 And that’s when the Girl Scout moment happened.  I turned to watch this man receive his items.  Two little girls handed him one bag each.  My mind popped over to the Acme in my home town when I bought my Thin Mints last winter.  Two girls handed me my Thin Mints then in the same manner that these two girls provided a much needed meal to a half-handed, family hated, heroin addicted man who, by the way, is made in the image of God just as am I – the suburban Thin Mint fan.  Just as the parents of the Girl Scouts looked on with joy, so did the parents of these girls.

Another moment of joy for me was when I watched a down winter coat that had hung in my closet for at least four years leave on a man as he faded from view on Kensington Avenue.  He had been prayed with (not for), fed, encouraged and warmed all in the name of our LORD.

There was one other moment on this night that made my knees buckle.  The whole time we were there, I was not aware of any couples coming to our table.  Toward the end of the evening, a man and woman came up.  I prayed with him while a woman on our team prayed with her.  An unusually strong guiding came over me when I felt urged to ask the man about the lady with him.  John, is she your girlfriend? …your wife?  She’s my girlfriend.  What’s her name?  Her name is Gabriella.

My knees buckled and my voice cracked.

Her name (which means angel in Spanish) was the only woman’s name I heard of any woman coming for a meal in the almost three hours we were there.  Of all the English or Spanish woman’s names I could have heard in that moment, this woman’s name was the same name given to a baby girl lost this summer to a young couple I love and have prayed for guidance in how to best serve.  In being strongly urged to inquire of this woman's name, God provided assurance to me that all will be well in the lives of this young couple.  God’s Love is evident and obvious.

Each time I go to serve through Urban Hope, I come away so charged up that I must wonder if they, the forgotten and overlooked of this world, may have served me even more than I may have served them...
at 1/01/2017 07:50:00 PM