The Archbishop of Canterbury Versus the Homeless Addicted Person

The Archbishop of Canterbury Versus the Homeless Addict

Having grown up as the son of an Episcopal Priest, and an honorable one at that, I had many unusual and wonderful experiences, not the least of which was being in the presence of many bigwigs of the Episcopal Church.  I remember attending a church service led by the Archbishop of Canterbury who is the big boss of the Episcopal and Anglican Church.  If you’re not familiar with what I’m talking about, don’t worry about it.  It’s hardly worth your time to understand.  Just understand that the archbishop is one of the high-level organizational managers in the organization known as Episcopal.

In and of itself, the church service was beautiful with its grandness, massive organ and choir performing songs and anthems rooted in Christian Faith.  The robes were stunning and the fragrance of incense suggested majesty and holiness.  The words of the prayers were profound as they requested this and praised that of God.  In the words of one Episcopal priest who I’ve had interaction with, such an experience is part worship and part theater.

In recent weeks, as my bravery has increased through my ongoing association with Urban Hope, I’ve begun to interact, one on one, with homeless addicts on the streets that line my path between I-95 and 210 East Tioga Ave.   This past Sunday morning, I sat down on a Wawa Store curb with Mickey, “like the mouse” she clarified.  (Her name is Kim until she decides she trusts you with the truth.)  She’s 29 and has been living on the streets for a few months. Her brother killed himself a month ago. A street friend died of an overdose within the past couple of days. Her robe is a hodgepodge of donated oversized clothes and her incense is a stench of body odor made manifest a couple yards away.

Mickey’s words were simple and to the point.  Along with her sharing of the deaths I mentioned above, her requests included handing me some change to go into the Wawa Store to buy her a bottle of water.  (They tell her to leave when she enters on her own.)   She also asked me if I would give her a ride to Lehigh Ave, just a few blocks away.

When I asked if she was going there to buy her next supply of drugs, she sheepishly nodded in the affirmative with her eyes looking to the ground and her face buried in the fold of her arm.  I explained to her that I couldn’t drive her because I don’t want to help her with her drug addiction and that I don’t want her to die.  I reminded her that I attend Urban Hope Church and I wish she would visit there.

There was a pause and then I said this…

“Mickey, say these words… ‘I am a good person. God, I need you.”  She looked at me with a bit of confusion and introspection in her eyes.  I repeated…

“Mickey, repeat it.” I encouraged.

And with that, her humanity leaked out of her soul through her tears…

As she shed those tears, I told her that she just prayed and that God loves her.

There was another moment of silence, the likes of which no theater performance would ever understand.  She stood up from the Wawa curb that separates that store from the Rite Aid parking lot and I joined her. 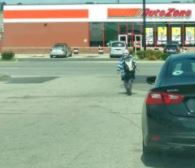 She turned and began her trek down Aramingo Avenue toward Lehigh to purchase her next round of heroin.

Update:
It is now Tuesday evening after having originally written this blog. Part of the story that I did not mention was that I was able to give Mickey a small supply of clothes that had been given to me to give to a homeless woman. When I saw her today she was wearing those clothes and looking much better and much more proud of herself. Through this experience I've come to realize that it's one thing to deliver clothes for someone else to distribute. It is far more exciting to distribute the clothes directly to the person in need.
at 5/29/2017 02:26:00 PM