This past weekend was a time of personal realization as I went about doing what I do in Kensington.  The first moment that I caught myself in this theme of realizing how comfortable I am there was as I was walking across Kensington Avenue at Summerset so as to look for people I know. 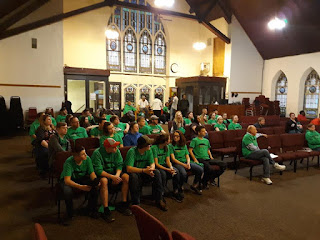 Allow me to set the stage…

This was not one of those times when I was out doing my own thing.  I was with the Urban Hope Church.  About 50 teenagers and their accompanying adult leadership from three youth ministries from across Pennsylvania were with us.  We had set up tables right about here so as to distribute food and clothes, to chat and to pray with those who wanted prayer.

It was as I was walking across Kensington Avenue from right to left in this linked picture that I first noticed how comfortable I was in doing so.  "The Ave." as it's sometimes referred had lost its intimidation to my soul.  I was simply crossing a street.  The roar of "The El"[1] was no longer a distraction for now it was simply part of the place, not much different than the picture on your wall that you love but hardly notice after a while.

As I walked around this corner from right to left in this linked picture, I saw a few men and women who I know and many who I don't.  A man who I'd not seen since Emerald City's deletion walked up to me to be sure I knew that he and his wife have been approved for housing by Pathways to Housing and will be moving in next week.  I gave him my card and asked him to please call me so I can visit.  He promised he would.

A few steps later, I found a woman whose partner is in RCF.[2]  "Will you go visit her for me, Chris? I'm not allowed."

"Sure.  I'd be happy to… Would you like to check out the clothes Urban Hope Church brought?  We have a table set up across the street."

She gave me a sidearm hug that stuck all the way back across "The Ave." and to the table set up and hosted by rural teens who greeted her with the love of Christ.

As she was checking out clothes, Louise, an active member of Urban Hope, and I decided to look for "Natalie" who had recently been released from RCF after about a year of confinement and was back on the streets.  Louise, whose real name is Louise and "Natalie" whose real name is not "Natalie" developed a bond one day when Natalie visited Urban Hope with me during a time when she was not using her "medicine."

Jump Back About One Year
Shortly before that year-long incarceration, Louise had asked me on a "Homeless Ministry" outreach event at that time and at the same intersection if I had seen Natalie recently.

"I've not but I sure wish I would so the two of you could connect again.  I know the two of you have a natural bond."  No sooner had I said that (Keep in mind that this was over a year ago.)  that I looked across "The Ave." and there she was, dressed in such a way that I knew she was looking for a date or multiple dates for the night so as to fund her medicinal needs.

That night over a year ago I called over to Natalie.  She came over and gave us both a hug.  Louise and Natalie chatted together something like a loving mother and daughter who had not seen each other in some time.  After a while, Natalie left and continued her availability on her street corner of choice.

Back to This Past Weekend

Louise and I walked across "The Ave." We meandered to and then stood next to a table hosted by a Mennonite group of men, women, and teens as they served dinner, drinks and conversation with people coming to and leaving from "The Last Stop."

Barely a couple minutes later the unthinkable, the non-imaginable in the absence of the divine hand of God happened.  From out of nowhere from our earthly seat in God's plan for her, Natalie walked right up to us and started to walk past having not seen us.  I called out to her using her preferred street name which is neither her blog name nor her real name.  She turned around.  Natalie's bond for Louise bloomed into a delightful smile.  They hugged and chatted as if no time had passed.

This 'sentence' above was not any sort of typographical error or computer glitch.  It's a fairly accurate order of events 24 hours each day and seven days each week, for almost every homeless woman on the streets who are dealing with Substance Use Disorder.

Please understand the miraculous nature of this true story thus far.  On two out of two occasions when Louise was hoping to find Natalie with whom she feels a motherly bond, Natalie walked right onto the stage.  "Dates" take ladies to the front or back seats of cars where they provide their 'services' on streets right there in Kensington or in very expensive center city hotels or in by-the-hour motels in PA, N.J. or Delaware.  Natalie has been in all of those settings and could have been on either of these nights.