It was a fairly typical day on Kensington Ave up until that moment when I pulled over to call my sister Kim right about here to sing happy birthday to her.  We chatted for a bit and then said our goodbyes.

I sat for a moment and just watched the flow of life around me.  People were cooling off in the opened fire hydrant that had a fountain nozzle attached.  Cars driving past would slow down for the free wash or drive around it as if trying to pass a slow car.

Deciding it was time to leave, I slowly drove south on "The Ave" keeping an eye out in hopes of finding specific people with whom I've been privileged to know and love.  "Rose" was talking to a man on the opposite side of the road.  Having recently developed the skill of mid-city-block u-turns, I did just that, pulled up to this curb and Rose stepped forward to lean in my open passenger door window.  That's not an ideal pose for my car to be in with any young lady.  Police tend to think it is the start of a "date."  I hopped out, gave Rose a hug and was introduced to the man, a relative from the area.  We chatted for a bit and then said our goodbyes.

I rounded the corner off of The Ave and turned onto Ruth Street.  I got about halfway down that block when I saw a man close to death by overdose being tended to by one man from a car that had stopped and two other men from the street.  One Narcan had already been given by one of the homeless men.  These three really did not know what should be done at such a time and so I took over and they   One called 911.  After about 4 minutes from the first Narcan, I provided a second one from my supply.  With barely any responding to the Narcan evident, I started planning on running to my car fifty feet away to get more from my supply.
gladly let me.

Just then, a young lady of the streets who I've never seen prior to this moment was just getting out of a man's car, presumably from a 'date.'  She came over with her own supply of Narcan which we almost used. 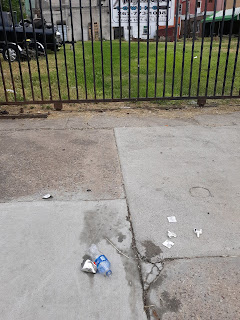 The formerly almost dead man opened his eyes and looked at me with a VERY shocked look.  I looked right at him as he laid on this sidewalk and said something like "Welcome back from being almost dead!"  He stood up, got back into the Jeep from whence he had arrived.  The two homeless men wanted to get out of there before the ambulance showed up.  We said our goodbyes.

The formerly almost dead man, his driver and I chatted for a bit and his driver said he would take the man to the local hospital.  With that, I encouraged this man to get the help he needs.  He agreed and we said our goodbyes.