Kensington Does Not Have an Opioid Crisis! 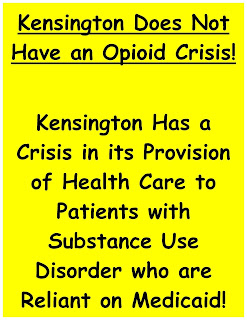 Kensington[1] Has a Crisis in its Provision of Health Care to Patients with Substance Use Disorder who are Reliant on Medicaid!

Let's look at the word:  Inanimate

Definitions include:  not in a physically live state and not active, energetic, or lively

As an inanimate substance, heroin is incapable of causing a crisis.  It just sits there waiting to be used for its purpose by an animate (living, alive, breathing, conscious) being, in this case, patients with Substance Use Disorder who are homeless[4] on the streets of Kensington.

We cannot reason with an inanimate substance.  We cannot yell at heroin, scold it, put it in time out nor any such action that will encourage it to change its ways and start to behave.  It's just being itself!

Heroin is incapable of changing its ways and so we must change our ways in response to it.

Nearly 100% of the people on the streets of Kensington dealing with substance use disorder are reliant on the Medicaid system for the financial coverage of their health care.   That one simple fact alone makes it very obvious to any informed observer that this issue is not so much an opioid crisis as it is a crisis in the provision of healthcare to patients of a recognized disease known as substance use disorder.

Solve the Medicaid-related issues and you will greatly reduce the opioid issue.

Here are a few examples in blogs that I've written that show how the Medicaid system has failed these patients with Substance Use Disorder:

Read about the R.N. who told a recently overdosed (and saved by Narcan) patient to"Get out of my emergency room!"

Read about the patient who was desperately seeking detox and needed to be admitted to a medical hospital for an infection.  She was treated for that infection and not treated for her detox-related symptoms.  She signed out AMA.[5]

Read a firsthand account that includes a brilliant summary by a patient who very much wanted detox and healing.

Read about the damage caused when a patient with Substance Use Disorder is not given comfort care in a timely manner - even after admission to a Medicaid level facility.

Read about the "mental rot" experienced by patients of Substance Use Disorder, as they sit in a jail cell, described as an "oversized toilet stall with cots."

Read a story that compares Medicaid provision of health care for patients with Substance Use Disorder with private insurance doing the same.

These true accounts of life in the world of Medicaid level health care provision for the patient with Substance Use Disorder make it very clear that we must change how we respond to this inanimate substance called heroin.

In a TED Talk by Johann Hari, he concludes with "The Opposite of addiction is not sobriety.  It is connection."

Herein lies the key to ending Kensington's health care PROVISION crisis that has for so long been mislabeled as an opioid crisis.

I recently asked members of a Facebook group whose members have been directly affected by this issue for their thoughts on all of this.  Here's a snapshot of their responses:

Notice that the three highest vote items all involve how  professionals who have dedicated their careers to the ideals of Hippocrates have failed within the realm of Medicaid to provide needed and very much wanted services.

We must do better…

The inanimate 'opioid crisis' cannot be won because it does not exist.

The true crisis is very much within the animate world of health care provision to Medicaid reliant and street-bound patients with Substance use Disorder and can be won.

To that end, I propose the following as described in this recent blog.

[1] The situation at hand goes far beyond the geography of Kensington.  For the sake of discussion, I focus on this amazing community.

[2] And it's mystery additives

[3] Originally meant to hold buttons for high-priced suits and dresses.

[4] Some in subsidized housing

[5] Against Medical Advice and is still on the streets