As I sat at the street intersection of "This and That" on this Christmas Eve, the steady beat of the Little Drummer Boy continued with its all too well-known rhythm of life on the streets of Kensington.

There was an increase in the desire for connection through conversation on this night in which the world of the healthy celebrates the Birth of the Lord.

This is the world of patients with Substance Use Disorder who are forced into prostitution by a Medicaid reliant medical system that knows not or cares not how to bring healing to its patients.

One woman of mid-twenty years whose appearance is that of an 11th-grade girl waiting for her school bus sat on the back bumper of my opened trunk car with me as if it were a park bench at her bus stop or in McPherson Square.  She shared with me the resentment that she feels in being the sole income provider for her and her long-time boyfriend.  As the woman in their heterosexual deeply committed relationship, it is her systematically understood role to make herself available to random jawns[1] for their own selfish sexual purposes for a price so as to provide funds for her and her lover's medicinal needs.

A very short time later in this evening, this evening otherwise awaiting the Birth of the Christ, I watched as she entered two cars within one hour on this Holy Night.  She can't take a break for this night or any night, afternoon or morning because she must raise about $500 per twenty-four-hour cycle so as to support the untreated addiction that she and her lover would rather not have that lives on and thrives on within them both.

It is her long-time lover's systematically understood role in this ongoing rhythm to allow her to be rented for her sexual 'services' to unknown jawns.  In a separate conversation with him on a different night not long ago near the same intersection, I told him as his back was deliberately turned away from her so as not to see her leave on her rented rounds that "She just got into a dark-colored Ford pickup truck with a New Jersey tag."  His response with a noticeable sense of sad relief was "Oh good.  He's a regular."

At the same intersection, as she and I sat and chatted, another woman paced and paced with the goal of renting herself.  Jawns are slower to pick her up for reasons that go beyond the point of this blog.  As she paced and paced, I asked her at one point if she would like my typical handouts of a banana and water.  She said 'Yes.'

On this Night of Holy Anticipation, I asked her if she would like to read about the Birth of Jesus from the atypical 'song sheet' that I was sharing on this night.  Her response while she was pacing in the 'Rent me.' lane at the intersection of "This and That" was a surprisingly sparkle-filled "Oh.  Yes.  Please."

She gladly took the sheet of paper to be read later.  For now, however, she needed to negotiate a price for service with the driver of the car who had just pulled over to check her out as if she were a piece of meat on display at Outback Steak House.  She got in and off she went with a random 'jawn' to her left in his driver's seat and a deliberate chapter 2 of the Gospel of Luke to her right in her pocket. 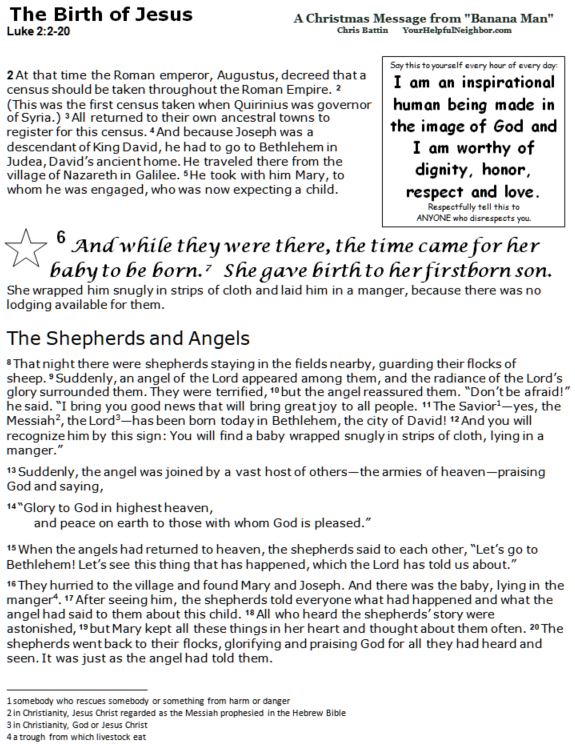 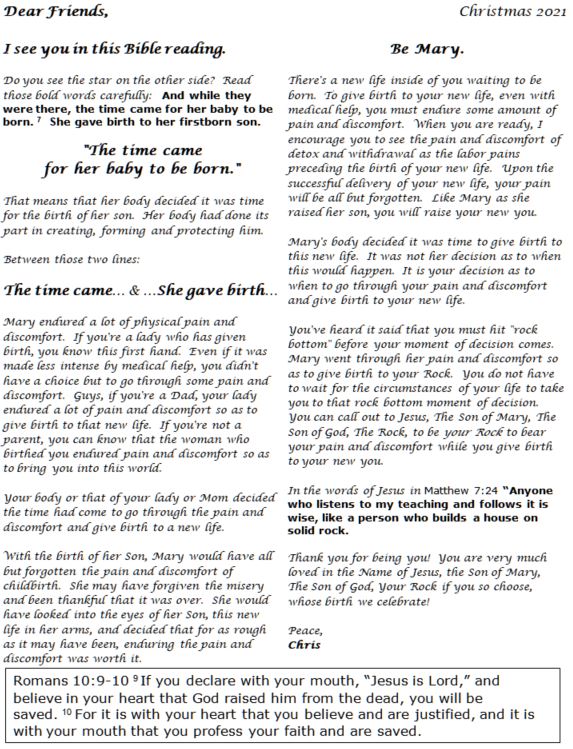 [1] The term used by these women when discussing these males