Before I say what I want to tell you, I want you to know that I despise the words 'prostitute, whore, and hooker.'  They are words that conjure up images of something less than the human being made in the image of God that every single human being is by virtue of their existence and nothing more or nothing less.
There are times, however, when I think that, regretfully, I need to use these words to paint in your mind's eye the experiences that I just had this afternoon, within two hours of these typed words finding their way onto my computer screen.

After church today, after worshiping with Bob, a former Emerald City resident who is doing all that he can determine to do to continue to put his days of addiction and homelessness behind him - and doing a great job of doing so - I began to investigate leads that I had regarding new places to which the Emerald City community has moved.  It's generally understood at this point that reports provided by the City of Brotherly Love that so many people found their way to detox or other housing are greatly exaggerated in the city's favor.  In reality, many people who called Emerald City 'home' are, still on the street and in less community than they were prior to January 31.

As I drove up and down Kensington Avenue, in search of men or women who I may know, I stopped at one red light and saw a cluster of four women and two men standing on a street corner.  I knew one of the women, a grandmotherly type of lady and potentially a matriarch of Emerald City prior to its deletion.  She initiated contact with a wave and a "Hi Chris."  I pulled my car over to the side of the street and parked.  We chatted for a while as I stood with her on the sidewalk.  It was in this chat that she confirmed what I and other people doing what I do have been concerned about - that most of the people of Emerald City have scattered across Kensington and are walking around with no specific place in which to settle down.

As this conversation continued, the young lady next to us chimed in mentioning that she knew me from my visits to Emerald City.  I'll call her "Pebbles" for this blog.  I gave both of them my ministry card so that they could call on me if needed.

Shortly thereafter, the conversation was coming to a natural conclusion.  One of the men accepted my offer of a bottle of water.

As I was sitting in my car waiting for my light to turn green, an awesome moment happened.  This younger lady, this 'prostitute', this 'whore', this 'hooker' called out "Hey Chris, can I have more cards?  What's written on the back is really great."

"Sure, Pebbles here's more." I told her as I gave her more cards for her to give to her 'prostitute', 'whore', 'hooker' street corner standing friends.  These six human beings, four women and two men, made in the image of God, were, at this moment, the purest 'congregation' in a church any Christian could ever hope to find.  And there I was, with a 'prostitute', 'whore', 'hooker' acting as an evangelist distributing Christian Scripture and a prayer to three other 'prostitutes', 'whores', 'hookers' and the two men who were most likely drug dealers.

There is seldom a 'story's conclusion' to my blogs for one very real reason.  As you read this, any or all of these ladies are searching for or are engaged in some degree of a sex act to raise funds so as to buy their medicine and the dealers are dealing because they know no other way.  If these ladies have procured enough funds by way of their 10 to 15 'dates' per 24-hour cycle, they may be injecting their medicine as you read.

Here's what this young lady, this 'prostitute', 'whore', 'hooker' 'evangelist-for-a-moment-in-time' desired to distribute: 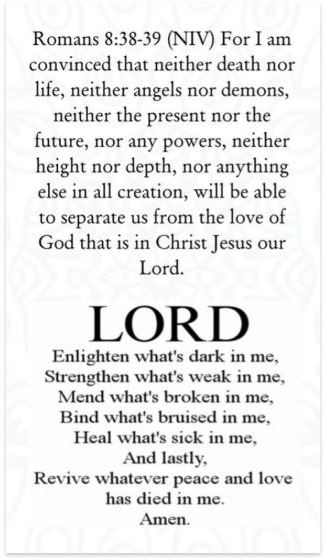