The Somerset Station Closure is a Side Effect of a Larger Crisis in Kensington. 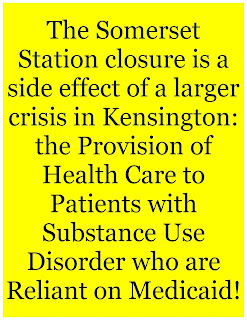 The Somerset Station closure is a side effect of a larger crisis in Kensington: the Provision of Health Care to Patients with Substance Use Disorder who are Reliant on Medicaid!

The Somerset Station is reportedly being closed due to the 'dangers' that are prevalent there.  Allison was, from this limited perspective, one of those 'dangers' and an obstacle to patrons of the El one day as she laid on those steps turning blue with overdose.

With two doses of Narcan in her system, she was taken by ambulance to Episcopal Hospital.[1]  The care that she received in those minutes following her near-death experience was provided by a registered nurse who had vowed her career to the ideals of Hippocrates.  That nurse perverted her oath and told Allison to "Get out of my emergency room!"

To this day, Allison floats between housing and street life with all of the hazards that come with that lifestyle.  She frequents the Somerset Station and would be considered by a non-understanding member of the public to be one of the 'dangers' at that station.

Allison is not the reason for the closure of the Somerset SEPTA El stop.

Allison represents hundreds and maybe thousands of real-life human beings in Kensington who have been mistreated by the inadequacies of Hippocrates-committed medical professionals within our local Medicaid system.

She and those other hundreds/thousands of people are patients of the officially recognized diagnosis of Substance Use Disorder.  As such, they should be treated accordingly, with prompt and dignified care.  They are not.  The collateral result is the closure of the Somerset Station that we wrongly blame on the mislabeled "Opioid Crisis."

I fully believe that there is hope for this situation.  This hope will bring renewed healthy life to these patients with Substance Use Disorder and to the community of Kensington and make the closure of the Somerset Station nothing more than a misinformed idea.

I invite you to click on the following link to continue reading on this vital topic:

There is a way to provide prompt, dignity, and respect-filled detox to Medicaid-reliant patients of Substance Use Disorder!

[1] Episcopal Hospital is the hospital closest to the bullseye of the inaccurately labeled "Opioid Crisis." This inaccurately focused crisis is the greatest of its kind on the entire east coast of the United States of America.