From Crying to Consuming

This was a tough week.  Two people who I know lost their lives to an inanimate powder.

This blog is about one of those people and the reaction that his friends who knew him from the street had upon hearing of his death.

One person who has moved on gloriously from their own street days described Alexander as follows:

Today one of my favorite people in the world left this earth.

My friend (Real Name) was one of very few people who didn’t let drugs take over their soul or their heart and no matter how f’d up he was, there was always a glimpse of who he really was showing. He was so charismatic. He was literally one of the smartest people I’ve ever known, we would spend hours talking about books, music, theology, philosophy, you name it- he could talk about it (with intelligence). I never knew a person so full of useFUL information. We had some bad times too, we suffered together, but it was the good stuff that made us close.

I wish so badly that his suffering ended before he left this earth.

I did not know Alexander to that depth but I knew him to be a true gentleman on the streets of Kensington.

Another friend of mine who is no longer on the streets described him as "my only true friend who lived on those streets with me."

Several people asked this question in these past few days:

"Why did this happen to Alexander?"

Alexander and hundreds of other people in Kensington, multiple times each day, play the opioid version of Russian Rolette.  In the original version of the 'game,' Russian Rolette is "the practice of loading a bullet into one chamber of a revolver, spinning the cylinder, and then pulling the trigger while pointing the gun at one's own head."

In this 'game', there are as few as five empty chambers in the gun.  The person spins the cylinder, aims, and fires the gun at their own head.

On the streets of Kensington, our loved ones unwittingly participate in this dangerous activity that closely resembles Russian Rolette.  There is one difference.  There are more empty chambers in the 'gun' of the Substance Use Disorder patient than there are in the actual gun of the one playing this dangerous 'game.'  The heroin version of Russian Rolette can, in theory, go on for quite some time before the 'bullet is in the firing chamber.'

Our Substance Use Disorder medical patient/loved ones 'pull the trigger' multiple times each and every day.  Eventually, the bullet is in the firing chamber and our loved one overdoses.  If they are in the presence of other people, there's a chance they will be saved by Narcan and, in the absence of prompt dignity and respect-filled care, live to continue to play the 'game'.

My friends cried and asked,

"Why did this happen to Alexander?"

The all too simple answer is that

"The bullet was in the firing chamber." 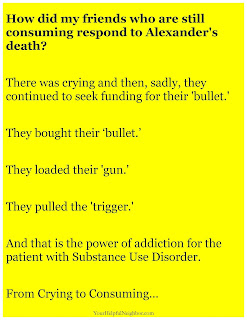 How did my friends who are still consuming respond to Alexander's death?


There was crying and then, sadly, they continued to seek funding for their 'bullet.'

They bought their 'bullet.'

They loaded their 'gun.'

They pulled the 'trigger.'

And that is the power of addiction for the patient with Substance Use Disorder.

From Crying to Consuming…

"From Tears to Toe Tags"