Amputations During the Civil War

Amputations During the Civil War in the 1860s were very common and saved lives.  Here's a video that looks at this topic.

Arms and legs were lost from one's body as a consequence of battle.  Artillery penetrated the limb and the result was often the loss of that extremity.

What does this have to do with Substance Use Disorder on the streets of Kensington?

As I've already written, there is a Civil War in the Mind occurring within patients with Substance Use Disorder.  This civil war's conflict within the patient causes this person to battle between wanting healing and wanting drug.

There is a drug making itself known more and more in Kensington.  It is called "Krokodil."  You can read about it here.  Look in the endnotes of this blog for the most critical part of this article.[i] 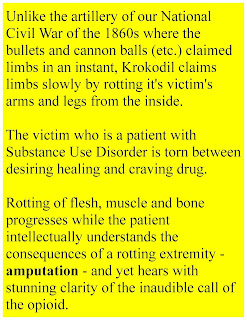 Unlike the artillery of our National Civil War of the 1860s where the bullets and cannon balls (etc.) claimed limbs in an instant, Krokodil claims limbs slowly by rotting it's victim's arms and legs from the inside (Warning: Graphic imagery!).

The victim who is a patient with Substance Use Disorder is torn between desiring detox and craving drug.  Rotting of flesh, muscle and bone progresses while the patient intellectually understands the consequences of a rotting extremity - potential amputation - and yet hears with stunning clarity the inaudible call of the opioid.

I've recently interacted with two people who I love from those streets who are facing this issue.  One's battle with Krokodil is very advanced with self reports of seeing their own bone.  The other's battle has only just begun with a dime sized black hole and a whole bunch of localized infection and swelling.

For anyone else facing such a critical situation, the answer for entering healing would be simple:  Go to a doctor, clinic or emergency room!

For patients with Substance Use Disorder who are reliant on Medicaid, it's not that simple.

Unlike the soldier on the Civil War battlefield who just happened to be in the wrong place in that moment the enemy artillery came calling, the patient dealing with Substance Use Disorder and now Krokodil can make the decision to go for health care before amputation becomes the only viable avenue to renewed health.  Sadly, there are unreasonable, and medically neglectful[ii] hoops created by far too many medical professionals who had dedicated their careers to the ideals of Hippocrates that must be jumped through while each patient is dealing with their own internal psychological civil war of healing vs. drug.  One side of their brain cries in literal agony for healing while the other side of the brain makes arrangements for income and then acquisition and consumption of their next drug supply.

Rotting of flesh, muscle and bone continues while the mental battle plays itself out to a possible conclusion of amputation.

Krokodil, just like heroin, is an inanimate substance.  As an inanimate substance, Krokodil is incapable of creating the massive crisis that exists right now on the streets of Kensington.  It is just being what it is, nothing more and nothing less.  The Medicaid healthcare system adds to the crisis with its lack of prompt dignity and respect filled connectional medical care.

We can do better for our loved ones on the streets of Kensington.  To that end, I invite you to continue reading "Kensington Does Not Have an Opioid Crisis!"

[i] Krokodil side effects

The most recognized side effect of krokodil is scaly green and black skin that develops shortly after injecting the drug.

Based on reports, people don’t need to use the drug for long to experience permanent and serious tissue damage that extends as deep as the bone.

Let’s take a closer look at the side effects responsible for the drug’s street name as well as its other side effects.

According to reports Trusted Source, people develop significant swelling and pain in the area where the drug is injected. This is followed by skin discoloration and scaling. Eventually large areas of ulceration occur where the tissue dies.

The damage is believed to be at least partly caused by the toxic effect of the additives used to make the drug, most of which are erosive to skin.

The drug is also not purified before injection. This may explain why the skin irritation happens almost immediately after injection.

The ulcerated skin often progresses to severe muscle and cartilage damage. The skin continues to ulcerate, eventually sloughing off and exposing the bone underneath.

Krokodil is 10 times Trusted Source more potent than morphine. Because of its pain-relieving effects, many people who use the drug ignore these side effects and put off treatment until extensive damage has been done, including gangrene.

Krokodil can damage the blood vessels that prevent the body’s tissues from getting the blood it needs. Blood vessel damage associated with the drug can cause gangrene. It can also lead to thrombophlebitis, which is inflammation of a vein caused by a blood clot.

Bone infections (osteomyelitis) and bone death (osteonecrosis) in parts of the body separate from the injection site have also been reported.

Bacteria are able to enter the bone through the deep tissue wounds, causing infection. Bone death occurs when blood flow to the bone slows or is stopped.

Amputation is sometimes needed to treat this type of damage.

Use of krokodil has been associated with a number of other serious side effects and complications, including:

Krokodil (desomorphine) is a dangerous and potentially fatal drug that causes a number of side effects.

Its toxic effects are experienced immediately after injecting it and progress very quickly.

If you or someone you know is using krokodil or misusing other opioids, here’s how to get help.

1. Failure of a health care provider or caregiver to observe due care and diligence in performing services or delivering medicine or other products so as to avoid harming a patient.

2. Generally, indifference or inadequate attention to one's responsibilities in regard to self-care, care of others, or other aspects of one's personal or professional life.