Yesterday (November 29th), I stepped out of my comfort zone a bit, and only a bit, and drove to Kensington AFTER DARK to attend a weekly gathering of families at Urban Hope.

HA... Let's back up and explore that last sentence.  It was only a bit out of my comfort zone to drive to Kensington AFTER DARK.  After a life time of being told that no white person ever goes to Kensington, I've grown totally comfortable with being there in the daylight so being there after dark and parking in my customary parking lot a block away was the next natural step. 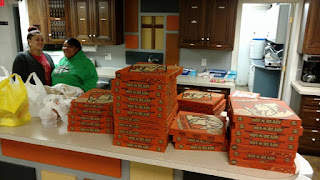 These 35 pizzas were used to represent the Last Supper and the remembrance of the first "communion."

Urban Hope includes foot washing as part of their semi-annual communion service and here's where my understanding of deliverance from what was to what can be in Christ was further developed.  You see, in my small group of men, there were 13 people - an odd number.  I wound up in a group of three men.

When it was my turn to have my feet washed, the white man who has been the director of Urban Hope for 20 years washed one foot while Annie's  (not her real name) father, a bold and outgoing black man whose "pre-Christ" story includes nine pullet holes in his body in one shootout washed the other foot.  How could anyone look down toward your own feet at two such diverse men - now brothers in Christ - and not be spiritually shaken by the experience?