Bananas and Gator Aid on a Street Corner

About three weeks ago, two seemingly unrelated happenings were, umm, happening simultaneously a few blocks apart.  When the thought of these two events merged in one lady's mind, she began to see that day when she can put dating in her past.

For the past three weeks, a woman who is not addicted but is struggling with life has been selling bottles of very cold water from a cooler at the corner of Lehigh and Aramingo.  A woman selling products at a street corner is an unusual site.  I stopped one day to congratulate her on her efforts.  Our conversation wondered into acknowledging that she has that most unfortunate option of dating.

"No. That's not one of my options. I have a family to feed and will do so with as much dignity as I can."

My friend Beth suggested to me that I investigate buying bananas from Produce Junction on Chichester Avenue on my way into the city.  Their prices are fantastic!  I can get 40 pounds for $11.50.  I shared the ideas with several men and women in Emerald City that if they could reimburse me that amount, they could sell the case at street corners and earn maybe $40.00.

One of the women of Emerald City pulled me aside at my last visit and said this:

"I've seen that woman selling waters and you've told us about the possibility of earning money with banana sales.  I'd like you to pick up a case of bananas.  I'm going to buy a case of Gatorade.  I'm going to go into business as soon as you can bring me the bananas.  I'll pay you back.  I'm sick of dating!  I'm sick of doing that disgusting stuff with up to 15 'men' a day just to survive and buy my medicine.  I'm going to sell these bananas and Gatorade at a good corner that I've identified and stop selling myself.  All I need is the bananas, the Gatorade and a cooler." 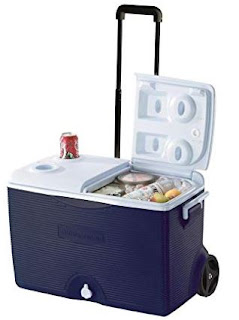 Tomorrow morning, as I make my way down Chichester Avenue, I'm picking up donated water[1] and two cases of bananas.  One of those cases will be given to this Emerald City resident who wants to stop selling herself for the sake of her medicine.

I do need to find a wheeled cooler for her efforts.  It needs to be large and this style with the handle in the middle so as to allow hauling of a box or case of product on the top.

If you would like to buy this cooler for this lady, please click here to see a growing list of other items that I need from Amazon.