A Story of Addiction and Homelessness with a Delaware County Twist

Witnessing Christ to My Neighbor

I live in Delaware County, Pa.  To get to Emerald City, I drive, under normal conditions about 10 minutes to I-95 and then into Philadelphia.  Those ten minutes were more like forty-five minutes yesterday.

There is one intersection on my route nicknamed "Little Five Points."  It is exactly that, a four-way intersection with an added side road that meets it.  Structurally, it is more or less the same country intersection that it was when George Washington and troops were marching to and from the Battle of Brandywine during our Revolutionary War.  This intersection gets extremely backed up during rush hour.  Anyone who lives in the area knows of the headache of getting stuck there when you'd rather keep moving.

I was discussing my frustration of being stuck in that traffic with Melanie, a former resident of Aston, Pa.[1] who knows this headache in travel between our two communities all too well.  She had been stuck in that back up many times prior to becoming addicted to heroin, homeless and now living for several years in The TRACKS and then in Emerald City and its surrounding bridge communities.  Once I realized our status as neighbors, I've made it a point to keep in close communication with her.  Sometimes, these days, she greets me with a hug and "Hi Neighbor Banana Man."

She's made it clear that due to horrible events in her life for which she has held God responsible, she is open to me but not to any discussions of Faith.  I respect that and don't push the issue.  I do what I can to represent Christ without saying a direct word.

This past Friday, I was making my rounds with water and no bananas.  Another woman initiated a Faith-filled conversation complete with appropriate Scripture references and thanking me for my willingness to be doing what I do. 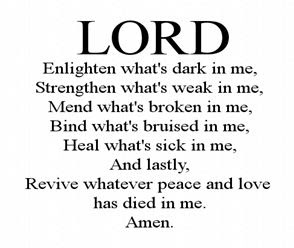 My latest practice has been to give a prayer paper to anyone who gives me even the slightest indication that they would be interested.  As I conversed with this second woman, my neighbor was sitting right there.  I handed the second woman the paper while respectfully pointing out that I recognized that my neighbor did not want one.  That opened the most incredible moment of Christian witnessing between the two women.  A few minutes later, as I was passing these two on the way back to my car, Melanie was teary-eyed and requested a prayer paper of her own.

Moral of this Story: Addicted people can provide Christian witness just as much as those of us who are not addicted AND the residents of Emerald City and its surrounding bridge communities are very often our Delaware County neighbors.

Telling an accurate and Anonymous Story…

To preserve anonymity, I'm leaving out most of the details of the following true story.  This past Friday night, a woman who I've known for close to a year who would be called a "street walker" a "lady of the night" and other much more offensive single word terms here in the suburbs, dared to cross Kensington Avenue at Summerset so as to come over to say "Hi", give me a hug and to chat for a while.

As an increasingly active part of the Urban Hope Community, I was serving through them this weekend with youth and their leaders from three different youth ministries from Hagerstown, Maryland and Waynesboro,  Pennsylvania.

Our original plan was to set up a food and clothing distribution at the corner of Kensington and Allegheny. Upon arrival, we found another group doing the same thing.  The quick decision was made to set up a few blocks away at Kensington and Summerset, a supposed hotbed of drug activity.  If it had not been for that last minute decision, I never would have found my young street walking friend who I'd not seen in a month or so.  If I could tell you the details of this whole story, you would be even more amazed at the significance of her greeting me as she did.

A Youth Group at the Corner of Kensington and Summerset?

If this had been a youth group doing these things, I'd be deeply concerned for them, their leaders and families.  These were not three youth groups serving the addicted and homeless on this supposedly drug infested intersection.  This was three youth ministries that merged for this weekend of prayer and service who truly ministered to the residents of this community.

Merging these two stories leads me to pose these questions:

Why do we rely on youth and their leaders from Maryland and central Pa on this past weekend, Indiana and other points west, plus Hawaii and Alaska,[3] to visit Delaware County's addicted and homeless sons and daughters?

I invite you to visit with me or take a bigger plunge and arrange a several day experience with Urban Hope Training Center to discover the awesome opportunities for ministry a few miles up the road.