Our plans were set.

Our earthly plans were set.  Following an Easter morning visit to Emerald City that tentatively involved "Emily" joining my partner in this ministry, Anna Batten,  and me for worship at Urban Hope, I was to be joining Anna for Easter dinner with her family.  At that dinner, I, Chris Battin was going to meet some of her family, including her son, Chris Batten. [1],[2] 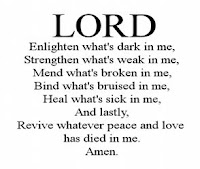 Anna had to change her plans and I could not find Emily.

I visited Emerald City and the equivalent community on Frankford Avenue and distributed two cases of water and almost six bags of bananas.  The number of men and women who initiated "Happy Easter" greetings with me was inspiring.  I handed out more copies of a prayer paper that Anna found some time ago.[3]

Following worship, I went to Save-A lot to buy more bananas and water.  The communities under these bridges are growing and the needs are great.  I returned to Emerald City for an extended time of conversation with anyone who wanted to talk.

"Demetrius" and his girlfriend of several years "Cecilia" told me that they needed to tell me something serious.  They invited me into their tent.  This couple has lived on the street for as long as I've been visiting Emerald City.  Cecilia looked at me with all seriousness and said "I just found out I'm pregnant.  It's time for us to get life straightened out and get out of here."  I smiled as I immediately thought of Romans 8:28…

And we know that God causes everything to work together for the good of those who love God and are called according to his purpose for them.

They were expecting me, in my secondary role[4] of "Pastorish Chris" to be upset with them.  When I smiled instead of scolded, they realized that their April Fool's joke didn't work.  We all had a good laugh at the attempt.  I told them how much I appreciate the acceptance that I feel from this community that this April fool's attempt communicated.

Mixed Emotions
As I made my way down the sidewalk, I asked a man if he had seen "Tierra" recently.  Tierra is the woman who I've witnessed save three out of the four people I've seen overdose to the point of needing Narcan.  A few days after that most recent save, I asked her how many times she's been in that situation.  Her answer, which I accept at face value, shocked me.  "I have fifty-five saves and no losses."

The man who I asked about her presence gave me an answer I wasn't expecting.  "She turned herself into the police.  She had warrants and wanted to get this life behind her."  I was simultaneously happy for her being off the street and concerned for this community that has lost one of its most effective lifeguards.[5]
Finding Emily
As I approached Emily's tent, I quietly called in with a poetic little phrase that doesn't work here being that "Emily" is her blog name and not her real name.[6]

After some conversation, we decided to go to Applebee's for Easter Dinner.  As we pulled into their parking lot, it was obvious that this wasn't going to work.  The line of people waiting for Easter Dinner was extending out the front door.  We drove up Aramingo Avenue to other restaurants.  Places were packed.  We ended up in the drive-through line at McDonald's.  With our orders delivered, I pulled over into a parking place in that same lot.

Emily's strawberry shake with its whipped cream topping and my coffee, her cheeseburger and fries and my sausage, egg and cheese McMuffin took on the sacredness of The Body and Blood of Christ Himself.[7]  Emily shared with me the painful events that led her to Emerald City and the hope and faith she is starting to sense on the horizon of her life's journey.   She acknowledged and sympathized with the pain in my life that she had read in my recent blog.

Hope and Faith: The Reasons For The Easter Season

Emily may not have realized it during that conversation but she tapped into the purest of all reasons for the Easter Season: Hope and Faith![8]

Jeremiah 29:11 New International Version (NIV)
11 For I know the plans I have for you,” declares the Lord, “plans to prosper you and not to harm you, plans to give you hope and a future.

Click here for more examples of hope in the Bible.

Click here for Examples of Faith in the Bible.

With our McDonald's Holy Eucharist[9] complete, we made our way to Dollar Tree across the street.  All issues related to how our paths originally crossed gave way to traveling the isles in search of a few needed items with some extra perusing time spent in the book section.

Well within a couple hours of when our journey began, we returned to Emerald City.  Emily went on with her day and I continued on with mine.

As I returned home, I could not help but reflect on the privilege of spending Resurrection Sunday with these good people and of being permitted to enter their lives.   I think of them as friends who are so completely misunderstood by our larger society.  Dispelling some of these misunderstandings is the primary reason for these blogs.


[1] Keep in mind, Anna and I only met through our mutual interest in the good people of the streets of Kensington.
[2] Emily and I have an agreement that she will visit Urban Hope with me and I will visit a Roman Catholic Church with her.  Either visit will be followed by Sunday lunch at Applebee's.
[3] We've been handing these out for a few weeks.  It's rewarding to see some of them sitting in significant places in each person's area.
[4] Secondary to that of "Banana Man"  Sometimes my primary and secondary roles merge when I am called "Pastorish Banana."
[5] It's a sad statement on our society that a person seeking medical intervention must seek it through law enforcement procedures.  In all likelihood, Tierra's warrant is due to an infraction of the law brought about by her need to continue to buy her medicine.
[6] Emily is a brilliant and fun to chat with poet with a deep and natural smile. She is by far the most discreet person in Emerald City. The activities of her life that are trying to hold her there are activities that I don't think I've ever actually seen her do. I've told her a time or two that I can't figure out why she's there. Emily reads these blogs and has encouraged me to keep writing.
[7] as we sat in my van in that parking lot because there was no room for us in any restaurant.
[8] I can't possibly do this topic justice in this blog but here's a quick look.
[9] Otherwise known as "Holy Communion" in some churches
at 4/02/2018 11:33:00 AM