I arrived in Kensington this morning, around 9:30am.  I broke with tradition and made my first stop under the bridge at Frankford and Lehigh Avenues.  It is here that a journey for me and a couple I've come to love may have taken a giant leap toward an all-new life for them.  I pulled my car up to the end of the bridge on the Southbound side of Frankford Avenue and parked just outside the bridge.  I glanced over to the spot where I was hoping to see and hoping not to see Nicola[1] and her fiancé of 5 years.

Allow me to explain the seemingly paradoxical hope.  Nicola and her man are a very special couple.  I've written about them here on a few occasions and they know it and have approved.  Here's my blog from the first time I met them.

This young couple became my most vivid living example of how addiction can live right alongside a very solid and growing Christian Faith as partially exemplified in this blog. 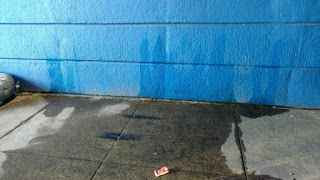 About a week before our first of three nor'easters in less than two weeks, Nicola shared with me her happiness that the two of them have been sponsored to leave Kensington for a detox far away.  The first nor'easter interrupted their travel plans.  Today, when I arrived and looked at their spot on the sidewalk with its mattress, blankets, tarp walls, clothes and life belongings, this is exactly what I found: A Big Empty Spot on the Sidewalk…

I got out of my Chevy Uplander to ask any of the other 30 or so residents if they knew where these two had gone.  Virtually everyone was asleep in their tents or in the open under blankets.  I returned to my car and drove around the block to Emerald City to find that community a bit more up and moving about.

I met a few new people and engaged them in conversation as I provided bananas and water.  The few people who were up all had that all too human look of having just rolled out of bed and wondering where there might be some coffee or something to eat.  The exceptions, of course, were those who were in the process of taking their morning medicine.  I chatted with a few people but for the most part, I walked up and down the sidewalk one time, packed up and went to church at Urban Hope.

After church, following some incredible conversation with Ed Lewis, the CEO of CENational as well as Rick and Brenda Cartagena, Rick, Brenda and I went to a wonderful traditional Puerto-Rican Restaurant where I ordered a Cheese Steak Hoagie that was awesome!  There was some comment, made in jest, about me ordering from the white side of the menu! J  More awesome conversation continued that may or may not lead to a new but very much related ministry for me.

From there, I went back to Frankford Avenue where a couple people confirmed for me that Nicola and her fiancé had, indeed, departed for detox and this next awesome chapter of their lives.  I am so very happy for them and a bit sad that I won't see them for who knows how long.  I did receive promises from them that I would soon get a phone call giving me an update on their progress.

After a wonderful conversation with one other person there under the Frankford Avenue Bridge, I went to Emerald City.  As I got out of my car, a lady resident of the community was walking right toward me.  We both smiled and I said, "Well, Hi Neighbor!"  She smiled back and said "Hi." Almost with a laugh.  You see, this young lady, prior to moving to Emerald City, lived in a town barely five miles from where I'm typing this blog at my desk in my home in Glen Mills, Pa.  We chatted briefly.

From there, I walked down the sidewalk and saw a man who I'd not seen in a few weeks.  He told me that his lady of several years is in jail.  When I told him that I'd like to go see her, he brightened up and said "I know she would like that.  I appreciate that as well, Chris."  Once I receive her full name and resident number, I will make plans to go.[2]  It's a half-day experience to sit with a resident of RCF for half an hour.  But it's worth it!

As I wandered down the street on Emerald, I chatted with many of the residents, some through their tent wall and some who opened their tent door.  Others were up and about.  At one point, a caramel and white pit-bull off leash wandered up to me looking for a rubdown.  This dog has lived there for a few months and is among the best behaved and loveable dogs I've ever met.  Did I mention he's a pit-bull?!

One of the most delightful conversations I had today was with my word-loving, blog reader friend.  We chatted in the flap of her tent and then again out on the sidewalk.  Allow me to tell her this:

I am so very much looking forward to the day that I will be reading your published works!

With an abundance of bananas still remaining, I drove one block west to under the Conrail Overpass where another 40 to 60 people live in third world squalor on Kensington Avenue.[3]  This seems to be a popular destination for what I call "Dump and Run" clothing distribution.  Piles of unneeded, out of season clothes lay on one section of sidewalk dropped there by people who want to do a good thing but are too fearful to talk to the recipients of the good they are trying to do.  The end result is these good clothes will be rained or snowed on and eventually discarded at the time of the weekly city cleanup.

As I was pulling my cooler and banana bags out of my Uplander, I heard from right there at the side of it, "Where have you been?!  We were all wondering where you were!  Everyone has been asking!"  I looked up and a man, a resident of these streets, who can only be described as 'Snoop Dogg's long lost twin brother' was looking at me with his standard grin.  I explained my run in with probable flu and reminded him of those two nor'easters.  He promptly understood and accepted a banana and water as he conveyed his concern and that of the community.  Ah… I could feel the love!

One of the joys of visiting these good people on Sundays is that other groups are there as well.  Today, I was aware of one Roman Catholic group serving an early hearty lunch with two brothers (or is the proper word 'monks?) as well as other laity from their congregation.  Later in the day, members of a Pentecostal church were serving dinner and seemed very excited to be there.  At another point, a mother and son duo was lovingly distributing homemade chicken noodle soup in memory of their daughter/sister who lost her battle with addiction a year or so ago.  I make it a point to always chat with these folks.  Our approach to our Faith may vary but our love for the fine people who live in these bridge communities is the same love from our common LORD.