Why Do I Do This? Relational Ministry Under a Bridge... 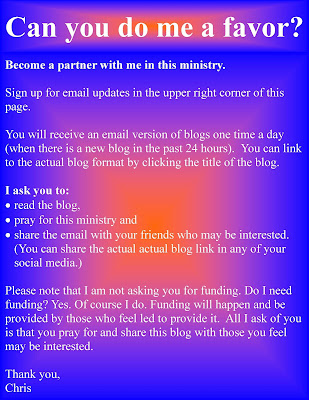 As I begin this writing, you have no idea how much I wish I could share with you the real names and faces of the good people of Emerald City and its local under-the-Conrail-tracks communities who I've come to know and love.

Yesterday's (Sunday, 3/4/18) adventure started with a visit to Emerald City before going to Urban Hope for Discipleship Training followed by their contemporary style Christ-Focused worship service which was followed on this day by their first monthly potluck supper.  Mm Mm Good!

As I arrived in Emerald City at about 9:00am, the community was just starting to wake up.  A few people were walking around.  Many were still asleep.  Others were in the process of injecting their morning medicine.  As I made my way down the sidewalk, I greeted those who were awake and offered them my traditional water and banana.  I've picked up the name "Banana Man."  I often hear as I driving down Emerald Street heading to my parking place at the far end of the bridge "Hey! Banana Man is here!"

Whenever I see a man or woman who I know and who is asleep on their mat, I leave these items near them, but not too near them.[1]   On this morning, I found a young couple who I've known for months.  They were still asleep and still there.  You see, they were supposed to be far from the grip of Kensington's drug pandemic and in a detox/rehab after having been sponsored to go.  They were looking forward to it but last week's Nor-Easter canceled their flight.  They are scheduled to go this week.  I always give the lady of this couple an extra banana because she loves them so much.  "That's why they call me…." Oh wait, I can't use real names here.  Never mind!

As I was loading my cooler back into my car, I glanced over to the sidewalk and saw a young man who I've not seen before.  I offered him a water and banana and asked if he was alright.  This young man in his mid-20s looked at me with tears running down his face and said "Not really."  I sat on the sidewalk with him and he told me about his two-year path from prescription Percocet following surgery to that spot on the sidewalk.  This otherwise strong young man told me about his muscle building days, family tragedies and his personal brokenness.  All of this poured out of a man who I'd never met prior to this moment.

This young man had a bit of a plan in place to move on with life.  He picked up a large trash bag of his total belongings and said he was going to walk to the El-Station[2] at Kensington and Summerset to beg some money and then catch the train toward a detox and rehab of which he had some knowledge.  I gave him a prayer paper and a Bible.  We said our goodbyes and off he went.

I made my way to Urban Hope.

With my belly full from a wonderful potluck supper, I went back to Emerald City.  Most everyone was awake with bellies full from the visiting churches who provide meals on Sundays.  As I was distributing more water and bananas,[3] I told people that I had (mostly) women's clothing and shoes for ladies who were interested.   Following Friday's weekly cleanout of the community by the city, three women told me that they had lost all or most of their belongings.  One woman had only sandals for shoes.

One of these ladies had pieced together a few miss-matched things to wear since Friday.  She told me that she hoped I had enough for her to have a total makeover "just like the TV shows."  She found several items and a barely discrete place to change into them.  She came back for me to see her.  She was beaming with delight and truly looked transformed.  The transformation in her spirit was evident in her pigtail framed smile.

Another woman who I've known since first visiting this community and who is a wonderful poet and lover of all things with words greeted me from the entrance of her tent with her natural sparkling eyes and smile.  She also looked through the clothes and picked a few items.  As she did so, she told me that she reads all of these blogs and likes them…

And so, allow me to pause in my blog to you, the public, and speak directly to you my Emerald City Blog Reader Friend in this place of public anonymity:

That seemingly spontaneous conversation that the three of us had yesterday was no accident.  I'm completely convinced that God wanted you and me to hear what that man shared about his Faith.  Moments like that don't just happen.  God loves you and me just as we are and without any conditions on that love.

It's an awesome thing in ministry to be gaining the trust of people who have lost trust in others.  The man mentioned above, upon hearing of my youth ministry background, asked me if I would talk to his Christian teenage daughter for him.  "Please tell her I love her and am working on getting my life put back together."

Last night, I was able to do exactly that by text and telephone.  At her Dad's request, this young lady and I have become Facebook Friends.  That means that you, young lady, are probably reading this blog.  To you, I say:

Hold firm to your Faith in our LORD.  God is doing a mighty thing in your Dad's life.  None of us know the details of the outcome of this journey.  Keep loving him with your forgiving spirit and keep praying.

Trust is not just with the residents of the community.  There's a somewhat rotating group of men who visit Emerald City for reasons that they know and you might guess.[4]  One shared with me some burdens he's faced recently and conveyed to me his trust that God will see him through.  One day, not long ago, I found myself in a group conversation with these men as we laughed about some things.  In the midst of that moment, God reminded me that these are the same men who would scare the you-know-what out of my suburban friends.

Trust comes slowly for some of the residents.  Due to experiences from childhood and other factors, some men and women won't trust anyone associated with a church or simply won't trust a man.

I have no clue as to the specifics of why but for months, this one woman would have rather ripped me to shreds verbally - and has a few times.  Yesterday, without any obvious reason as to why, "She called out to me, "Pastor Chris[5]…"  She shared with me her recent successful efforts on getting mostly free of drugs, gaining back some of her weight and feeling so much better about life.  As she shared, for the first time ever, she looked me right in the eyes.  Her shallow cheeked sneer had become a smile on a filled out face.

I share these things with you not to bring any glory to me.  This is not "me" doing these things.  Chris Battin, the tall rather skinny guy who never puts self at risk would not do these things.

Somewhere in the midst of driving to and from Urban Hope, a vision caught me.  I suddenly saw "those addicts" as being "those people made in the image of God and worthy of dignity, honor, respect, and love."  The grubby guy on the street corner with the 'hungry' sign became a man with an agonizing story.  The woman living and sleeping under that bridge or standing on the corner looking for a 'date' became my neighbor one town away, dare I add right down Concord Road, separated by five miles and three decades.

All of them became someone's loved one whose love is not lost but suffering from the burnt bridge often found between them.  Through this relational ministry, I've had the privilege to hear the accounts of heartache from both sides of the burnt bridge.  From time to time, I've felt like the useful bridge above the burnt bridge.

Why do I do this?  In this YouTube video from the group Casting Crowns my answer can be found in the monologue before the song and the song itself.

[1] It was explained to me by one person that if I get to close to anyone who is sleeping, due to so many suffering from PTSD, they might sense me there and come up swinging before they realize it is me.
[2] Elevated rail line that runs above Kensington Avenue
[3] I referred to it this time as dessert. J
[4] It's not to "date" the ladies.
[5] Several people have called me "Pastor Chris."  I've tried to make it clear that I am not an official (ordained) pastor but I try to be pastoral.  That led one woman to correct her entry in her book of men and phone numbers from "Pastor Chris" to Pastorish Chris."
at 3/05/2018 03:02:00 PM