When the Routine Becomes Incredible: A Relational Visit to the People of Emerald City

Matthew 26:41 “Watch and pray so that you will not fall into temptation. The spirit is willing, but the flesh is weak.”

Yesterday's visit to Emerald City started out routine enough but with the added pleasure of introducing Urban Hope's Pastor Jason to many of the residents who I've come to know and love.  Conversations with several men and women flowed smoothly as we distributed my traditional water and bananas. 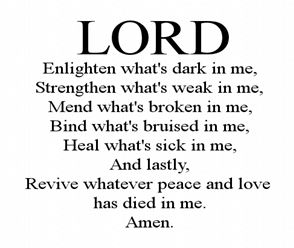 After a very worthwhile visit, Pastor Jason had to leave for another engagement.  I stayed and distributed five tubs of clothes and a prayer paper.  As is typical, I had mostly women's clothes and most on this day were very petite.  The prayer, as I explained, was "one size fits all" which got a good laugh or at least a polite chuckle from almost everyone.  I found it inspiring to look at a man or woman sitting or lying on their mat in some state of not being at their best, hearing that I had a prayer on a piece of paper and them reaching up for it and saying "Thank you." 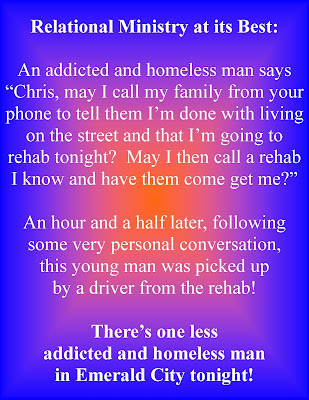 As I was finishing the clothing distribution, a young man who I've come to know asked if he could borrow my phone to call his parents.  He explained that he was sick of street life and wanted detox and rehab.  We walked to the relative quiet and privacy of the back hatch of my Chevy Uplander.  With the hatch up and us sitting in it's opening on the back bumper out of the lightly falling rain, he called his Dad who seemed to be very supportive.  This young man then took the bold step of calling a detox facility that he had left months ago "stupidly" as he explained to them.  Thanks to having private insurance, the voice on the other end of the phone said they would have a driver come and get him in about an hour.

I was not able to stay with him for that whole hour but we did talk for maybe 30 minutes.  During that time, we continued to sit in the open hatch of my Uplander.  As we did so, we could watch the activity of Emerald City.  With a population pushing 60 people these days, there is constant motion.  This young man talked about how sad he felt for these people who have not yet come to the point of action to make life better.  We watched as people roamed the sidewalk going from place to place within 'city limits' and beyond.  We watched as people injected heroin and smoked crack.  We watched as one young woman hopped in the passenger seat of a male-driven car and as she was dropped off twenty minutes later.  As we watched, this young man shared his story and of wanting so very much to be reunited with ALL of his family.

I needed to leave and I wanted him to be in charge of his own life without me seemingly babysitting him while he waited for the driver.  I said goodbye and he thanked me for helping.  He added that he wanted me to follow up with his family to see how he's doing.  I will.

My next stop was to check on the good people who live under the Frankford Avenue bridge one block away.  One young couple I know and love and who I have written about here were expecting to be gone by now after having been sponsored and fully funded to go to a detox and rehab far from the grip of Kensington.  They were still there and frustrated to be so.  We talked and I reminded them that if this plan was not working out, to please call another number I've given them.  She said that they would if need be.  Before leaving, I gave them a Bible which was gladly accepted.

With heavy rain moving into the area, I knew I needed to cut my visit short and go home.  Just before I drove out of town, I watched as the young man was greeted by the driver from the rehab.  He hopped in the car and off they went on the first leg of his journey to renewed wholeness.  As I drove away, I prayed for this man and this couple that they would find the detox and recovery that they sought within their willing spirits.


When God intervenes in the heart of a hurting soul, a routine visit to Emerald City can quickly become an off the charts incredible experience.  I am so very thankful for and blessed by each and every man and woman who allows me into their lives as they do what they do in Emerald City and its neighboring under-the-bridge communities.
at 3/02/2018 09:56:00 AM